The Hollywood LIE-Factory: Unscrambling The KNOWLES Family -- Hold The Phone! Are These Two Even Really Sisters?? 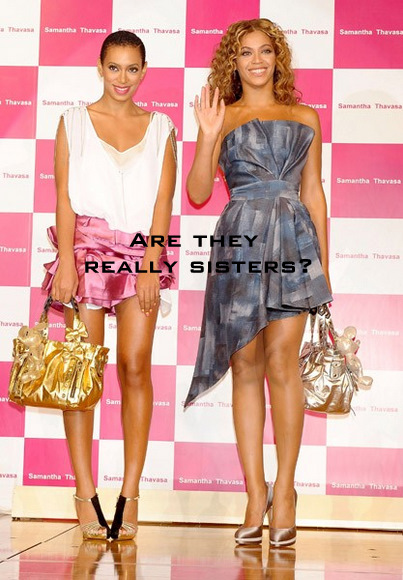 "For nothing is secret, that shall not be made manifest; neither any thing hid, that shall not be known and come abroad."
Luke 8:17
Ok, so I read a lot of blogs. I always want to know what people are saying...I enjoy reading people's comments. I could give two poots about what media says or even what the blogger says. I like to know what the word on the street is. That's how you can decipher truth from the lies. Although Beyonce is considered a media darling. The internet proves otherwise. As always, people are talking. One of the biggest things being thrown-around is that Beyonce is lying about her age. People can't understand how she can claim to be younger than Aaliyah and Usher. Things don't add-up. Anyway, I continue my blog browsing and landed on TheTruthAboutCelebrities where the question was raised...
Is Solange actually Beyonce's daughter?
I remember back at the begining of Destiny's Child I thought Beyonce was a beautiful 'woman'. You see, I was maybe 14 when they first came out and at that age you can easily tell who your peers are and who your peers aren't. I, at that time, did not consider her to be my peer. My brother that was 16 at the time, thought she was gorgeous and had a huge crush on her, but again, he did not consider her to be his peer. Fast forward to the Destiny Child drama with the members that ended-up leaving and being replaced. You basically had, from the original group, 2 girls left (Beyonce and Kelly Roland). As shady and scandalous as that ordeal was...fastforward a little more...and a little sister emerges out of nowhere around 2002. This is supposedly Beyonce's little sister Solange. According to other sources in the blogosphere, people are claiming that Beyonce was really born in 1974 according to The Texas Department of State Health. Hypothetically speaking, if she was born in 1974 she would really be 36 or 37. We all know black people age VERY well. We also know what the wonders of a little botox can do. Again, hypothetically speaking if she had a child around age 15 or 16 that would make the child maybe 22. So the numbers could actually work.

Well...if that is the case, then who is Solange's father? Well my mind goes directly to genetics. You see, Beyonce looks nothing like her supposed father Matthew Knowles. Guess who does look like him...Solange and Kelly Rowland! This would explain why Solange does not look a ton like her supposed mother Tina. Who does Beyonce look like? Tina Knowles, her supposed mother! Now if Beyonce is 36, hypothetically it would only be a stone's throw to conclude that her supposed mother...could actually be her sister! Again, this is just my brain putting 2 and 2 together. I could very well be wrong, but in Hollyweird nothing EVER is quite what it seems.
Hmmm...something to chew on...
﻿﻿
﻿﻿
﻿﻿ 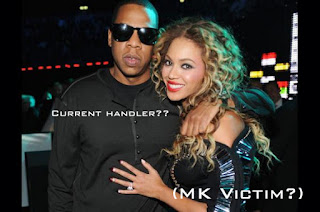 It is so readily appearant that Beyounce is miserable. She has to contend with the fact that his is really 37 years old as apposed to being 27. She had a daughter when she was about 15 years old. Her so called father is really her lover and the list goes on. Not to mention the fact that she is a part of the secret society The Black Boule, that is partly responsible taking the Nubian Nation off the path of righteousness. Now don't get me wrong I feel that we as individuals are responsible for our own souls, however we have these Uncle Tom Ni@@as that has pledge allegances to a white supremacy system to keep their own ppl in a state of mental slavery. It is for this reason I can't stand this bytch or Gay-z, 50 cents, kanye West, Lawrence Fishburn, Denzel Washington, Morgan Freeman, That fat skinny bytch Oprah, Will & Jada Pinkett, and lets not forget the King of the dookey stickers Quincy Jones. These are just a few of our Nubian brothers and sisters that have sold their souls for Fame and Fortune. These so called Black Celebrities don't give 2 cents about our plight. They are to busy glamorizing and admiring themselves. Trying to become Deities. I mean, how many damn award shows are these mother----- gonna have. Every damn time you turn around they going to some damn award ceremony. Give me a break. Then they have our dumb azzes rushing home to watch the shyt. (I never watch them) You can cold believe that those award shows you see on tv are not the only ones that they have. Most of them are not televised. These ppl are nothing but devil worshippers. And if we are not careful they will take up with them to hell. LISTEN UP PEOPLE, THE ENTERTAINMENT INDUSTRY IS VERY SATANIC. Did yall know that Walt Disney was a known pedophile. Yeah your favorite mouse Mickey was taken Mickie in the bathroom and sticking it to him. Wake up my ppl the hour glass is almost empty. MAY PEACE AND BLESSINGS BE UPON YOU.


Anonymous said...
First of all I do not believe that Mathews Knowles is Beyonce's real father. And it has been rumoured by ppl in the know that Beyonce was pregnant when she was very young. And if thats the case and Beyounce really being 37 years old that would make her child 22 years old. I know yall remember when Gabriel Union made that comment about her in Beyounce hanging out together when they were teenagers. Well Gabby is 36 years old and the only way they could have been teenagers together is if they are basically the same age


The Knowles Are Dysfunctional said...
@19:20 they are saying on other websites that Solange is Beyonce's daughter. I think the site was weallhateonbeyonce.blogspot.com. That family is hiding something and in a minute they will be exposed. Beyonce is all about image and she wants to be remembered as an icon. The only things she will be remembered for is stealing, killing (people's dreams), and destroy. This woman is the female version of the devil himself. Her father is a fallen angel also. This man is so low down and dirty. I never met a man so obsessed with money (no pon intended) that he will do anything to get it and to have a lot of it. I know he sold his soul a long time ago, way before he placed his young daughter in heels and taught her how to pop her coochie for all the men in the world. Matthew is very shrewd and one day he is going to run into someone who don't take no mess and will put him in his place or in the grave for trying to play CRIME BOSS.

KERI HILSON IS A INTERSEXUAL "SLASH" HERMAPHRODITE!
KERI AND CIARA WERE TOGETHER AT THE TUNNEL FOR INTERSEXUALS!
KERI WAS MAD THAT CIARA WANTED TO DISASSOCIATE HERSELF WITH KERI.
BEYONCE AND KERI ARE COUSINS!!!!!
THEY ALL ARE RELATED TO JAMESETTA HAWKINS!!!

bear an UNCANNY resemblance to one another.


Anonymous said...
@4:31 am
What state was Etta James mansion in. Because this would be why Gabby Union claimed to have been friend with Bey since they were teenagers. We all know that Gabby is 37.
Which brings me to my next point. How was Beyonce able to cover her real age from Letoya, kelly, Latavia and the rest of the Destiny's children. Being in her company for that many years, it seems like they should have known that the bitch is ancient in days.


Anonymous said...
It's really not that hard anon 6:50. You have women that keep their age from their men for years especially if they don't drive which is the only immediate way to get the info from a license which most keep in our purse. One has to go through changes to get birth records. This chick also had the corporation of her family in the lying.
I also read they picked younger girls for the group to help with the lie.


Anonymous said...
The plans that Matthew and Tina had for beyonce was never shared with the other girls of destiny child.
These plans are so obvious now. Beyonce had a red carpet event for her fragrance "heat" and only four people showed up.
Usher, Jay-Z, Michelle and Sheri Shephard. She has no friends. When she need them, they show up. When they need her, she's too busy.
Etta James is really 82 not 72. Tina Knowles birth name is Celestine Ann. She wasn't born Tina Knowles as she states in the press.

**UPDATE**
This Beyonce mess gets weirder and weirder...I'm not even thoroughly sold on "KING B" being entirely female...maybe partially female -- but her look is starting to show 'her' masculine side...
"Such a beautiful liar..." 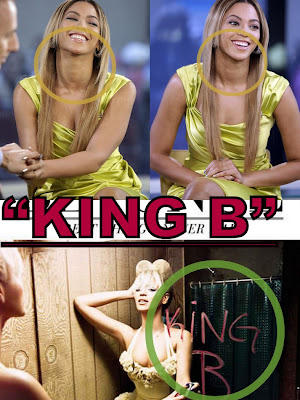 ....I'm interested to see where they're going with this pregnancy stunt. S/he may actually be having a child, but this looked so staged at the MTV VMAs (of all places) it's ridiculous. She should not be showing so soon I wouldn't think...and to be wearing maternity already...I think s/he knows people are onto her...
"quick get pregnant!"...
It honestly looks like a prop to me. There is no affection toward the belly at all. Just the same plastic smile.
this looks phoney-bologna
We will see...I can hardly wait to see...
If s/he swells up like a water-balloon (which s/he should) considering the body-type s/he portrays...I'll agree that s/he's carrying -- but something tells me s/he's about to disappear for a while. 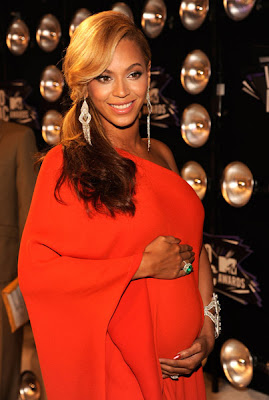 Do you feel that life as we've all known it is on the verge of a MAJOR change?

There's A Lot To Learn...Get Started!